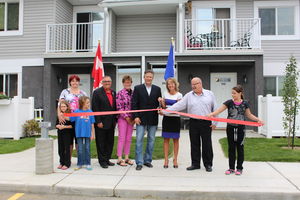 The Governments of Canada and Alberta along with Leduc Foundation, celebrated the official opening of Shkola Suites today. This new 8-suite affordable housing project was built to help house families most in need and families fleeing domestic abuse and consists of four 2-bedroom units, three 3-bedroom units and one 4-bedroom unit.

Blaine Calkins, Member of Parliament for Wetaskiwin on behalf of the Honourable Diane Finley, Minister of Human Resources and Skills Development and Minister Responsible for Canada Mortgage and Housing Corporation (CMHC), along with the Honourable Diana McQueen, Minister of Environment and Sustainable Resource Development, and Member of the Legislative Assembly of Alberta for Drayton Valley-Devon made the announcement today.

“Our Government is investing in affordable housing in Alberta to help create jobs and improve the quality of life for those families who need it most,” said MP Calkins. “This funding will help people in Calmar access safe and affordable housing that meets their needs. We remain focused on four priorities, as outlined by the Prime Minister, that Canadians care most about: their families, the safety of our streets and communities, their pride in being a citizen of this country, and of course, their personal financial security.”

“Our government is committed to working with our partners to build strong communities and develop more affordable housing for Alberta families,” said Diana McQueen, Minister of Environment and Sustainable Resource Development and MLA for Drayton Valley-Devon. “The Alberta government was proud to collaborate with the Government of Canada and Leduc Foundation on this project. Shkola Suites will be an invaluable addition to the community.” The total cost of the development is approximately $1.8 million. The Government of Canada, through CMHC, and the Province of Alberta, through Alberta Municipal Affairs, contributed a combined total of $1.2 million. Leduc Foundation provided the land valued at $287,500 and an additional $335,558. Two suites are targeted to families fleeing domestic abuse with rents below market. The building is placed on the site to permit a second phase of at least twelve suites to be completed in the future as the growth of the community dictates.

This funding comes as a result of the recently announced $121 million Investment in Affordable Housing (IAH) 2011-2014 Agreement between the Governments of Canada and Alberta. Alberta will use the funds under the new agreement to create new and renovate existing affordable housing for households in need. Economic Action Plan 2013 continues this commitment with a proposed federal investment of more than $1.25 billion over five years to renew the Investment in Affordable Housing to 2019. Funds provided to provinces and territories through IAH agreements will support the use of apprentices, which will support training of skilled labour. More than 136,000 households across Canada are no longer in housing need as a result of funding provided under the IAH from April 1, 2011 to December 31, 2012.

The Government of Canada, through CMHC, will invest approximately $2 billion in housing this year. Of this amount, $1.7 billion will be spent in support of close to 594,000 households living in existing social housing. In Alberta, this represents an estimated 37,250 households. These investments are improving the quality of life for low-income Canadians and households living in existing social housing, including individuals who are homeless or at-risk of homelessness, seniors, persons with disabilities, recent immigrants and Aboriginal people.

Through partnerships with federal and municipal governments, community groups, and the non-profit and private sectors, Alberta has made great strides to increase the supply of affordable housing across the province. Since 2007, the Government of Alberta has supported the development of 12,000 affordable housing units for homeless and lower-income Albertans through capital grant funding in 62 communities. The province exceeded its original goal of 11,000 units in September 2012.

For more information on Alberta’s housing support, visit http://municipalaffairs.gov.ab.ca/housing.cfm. To find out more about how the Government of Canada and CMHC are working to build stronger homes and communities for all Canadians, call CMHC at 1-800-668-2642 or visit www.cmhc-schl.gc.ca.