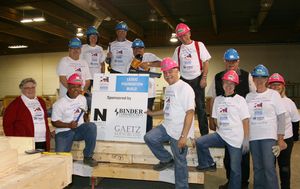 Leduc Regions MLA, Mayors and Councillors came together on October 1, 2014 to volunteer their time to build the walls for Leduc Foundation’s latest affordable housing project. Gaetz Landing is being built with the support of Habitat for Humanity Edmonton. In this unique partnership, Habitat has opened the doors of their Prefab Shop to allow community volunteers to help build the walls for Gaetz Landing.