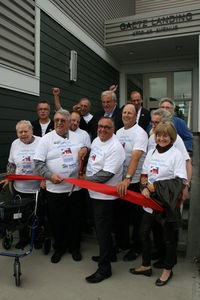 Leduc Foundation celebrated the opening of Gaetz Landing on Wednesday, September 9 th, 2015 - phase 1 of a 2 phase project, Gaetz Landing is a mixed use building located within walking distance to Main Street Leduc with 2 commercial rental units on the main floor, facing 49th Avenue, and 14 affordable housing suites - 2 barrier free suites on the main floor and 6 – 1 bedroom suites on each of the second and third floors. The building was designed by Janusz Najfeldt of Najfeldt Architect Inc., and built by Binder Construction Ltd.

Gaetz Landing was named after Clarence Gaetz to gratefully acknowledge his financial contribution to Leduc Foundation as well as his long standing commitment to our community.

The 3-Year Leduc-Beaumont-Devon Regional Affordable Housing Plan has been recognized and commended by Government officials and other housing management bodies throughout Alberta as being visionary in addressing the need for a full range of housing options in all of our communities.

In 2012 residual funds were identified and an extension of the plan was created that included the construction of Gaetz Landing and a financial contribution to Habitat for Humanity Edmonton, to support affordable home ownership each community.

In a unique partnership, Gaetz Landing was built with the support of Habitat for Humanity Edmonton. Habitat for Humanity Edmonton opened the doors of their Prefab Shop which allowed community volunteers to help build the walls for Gaetz Landing. Leduc Foundation is thrilled to say that 867 volunteers for a total of 6,502 volunteer hours were filled by local businesses, community groups, and individuals.

“Gaetz Landing is a welcome addition to our portfolio. We are fortunate to have very strong partnerships working together and can truly say that we are building our community together with the support of Habitat for Humanity Edmonton and the many volunteers that came together to build Gaetz Landing.” said Audrey Kelto, Chairman of the Leduc Foundation Board.

The grand opening ceremony got underway at 5:00 p.m. with Nancy M. Laing, Executive Director, Leduc Foundation acting as Master of Ceremonies. Presentations were made by the Mayors of Leduc County, City of Leduc, Town of Beaumont and Town of Devon, along with Alfred Nikolai, President & CEO, Habitat for Humanity Edmonton and Audrey Kelto, Councillor Leduc County and Chairman of the Leduc Foundation Board.